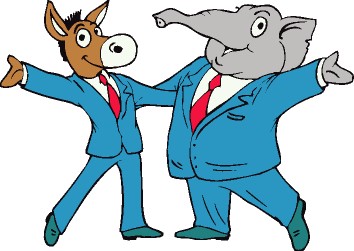 Do you know what the left-statist & right-statist “p-p problem” is? Retweet
Every election we hear how dramatic the differences are between the candidates of the Left and Right. But is it really true? Consider…

Maybe the differences between the Left and the Right aren’t so great after all. Maybe many of the differences reduce to matters of personal taste. We address this issue in our latest Mental Lever mini-article. Check it out…
Do statists have a p-p problem?
By Perry Willis & Jim Babka
Left-statists use the word profit as if it were a curse word. Right-statists do the same thing with the word pleasure. And both sides use The State to impose these prejudices on others…

In other words…
The left-statists and right-statists are united in a shared self-contradiction.
They do not treat other people’s profits and pleasures in the same way they treat their own. Thus, there are not two separate problems here. There is no profit problem for the left and pleasure problem for the right. There is instead one shared P-P Problem.
The P-P Problem is anti-life.
It leads to aggression against those things people most benefit from — profits and pleasures. The solution to the P-P Problem is the Zero Aggression Principle…
Don’t initiate force personally or politically.
In others words, don’t use politics and The State to impose your prejudices about profits and pleasures on other people. Use persuasion instead, if you’re really determined to have others prefer what you prefer.
–END of Mental Lever–