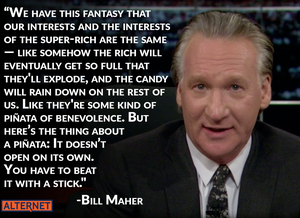 Is @BillMaher a bigot? #tlot Retweet
Bill Maher pretends to be godless. But he’s not. He has a god. He even believes in magic. His god is The State, and his magic is initiated force. Notice what Maher says in the attached Facebook meme.

“We have this fantasy that our interests and the interests of the super-rich are the same — like somehow the rich will eventually get so full that they’ll explode, and the candy will rain down on the rest of us. Like they’re some kind of pinata of benevolence. But here’s the thing about a pinata: it doesn’t open on its own. You have to beat it with a stick.“
– Bill Maher

Maher clearly wants The State to take things from rich people, using violence. He thinks this will deliver “candy” to the world. It’s a classic example of someone who wants to violate the Zero Aggression Principle, which says…

“Don’t threaten or initiate force against others, or ask politicians to do it for you.”

You see, Bill Maher is what I call a Chickenhawk Statist. Traditionally, “chickenhawks” are people who want wars to be fought, but who aren’t willing to do the fighting themselves. Bill Maher is the same way when it comes to violence against rich people.
He isn’t willing to take his stick and beat rich people himself. He’s not brave enough for that. He wants politicians and their armed goons to do it for him.
This makes Bill Maher morally reprehensible. But he’s also wrong about the “candy.” Here’s what he doesn’t understand…
Rich people consume very little of their wealth. In fact, most of them got rich through delayed gratification — by saving and investing. Nearly everything a rich person owns is constantly engaged in socially beneficial activities, both productive pursuits and philanthropy. This means…
The rich are NOT a pinata that delivers candy when beaten, but rather a cornucopia that rains benefits on all of us.
Look around your home. Every good thing you see was produced because some rich person provided the funds to manufacture it. They did this NOT by consuming but by saving.
And when you take this wealth away, you also reduce the good things that wealth was producing. The wealth can’t do two things at once. If you take it from one activity to fund another, the first activity stops.
Now, what does Maher’s statist stick actually deliver?
He assumes it will transfer “candy” from the wealthy to the less affluent. But in fact, The State has wealth transfer programs that go in all directions. Some transfer wealth from the rich to the poor (poverty programs), while others send wealth in the other direction (various forms of subsidies and corporate welfare). This sounds more like a game of musical chairs than a pinata than only rains candy on the poor.
But Maher also seems to assume the rich don’t deserve their wealth. After all, beating them with a stick could only be justified if the wealth was ill gotten. If there’s really evidence of such criminality then a case should be brought in court. Then, if a conviction results the ill gotten wealth should be returned to its rightful owners. The fact that Maher, and people like him, don’t promote this approach tells me that something else is going on here. I can sum that up in one sentence…

Hatred of earned affluence is the bigotry of the Left.