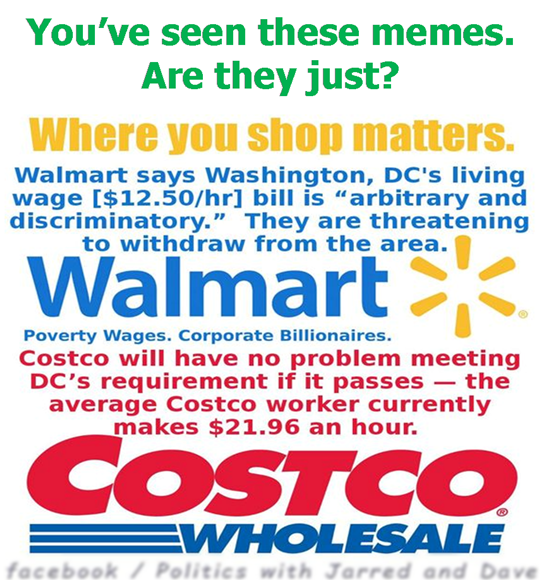 Do left-statists actually dislike people who can only afford to shop at Walmart? Retweet
Costco vs. Walmart
By Perry Willis
In this article…

Subtlety doesn’t work at Christmas parties.
At a recent Christmas party, the subject of wages, jobs, and, inevitably, the evils of Walmart came up. I observed that I knew nothing about Walmart. This expression of humility was intended as an example worthy of emulation, but I don’t think the message got across. What I really meant was…
Walmart isn’t my business. I have my own business to tend. I no more believe I could better run Walmart than Walmart’s managers could viably run my organization. Sure, there are some overlapping skills, but different talents are required for each enterprise. Alas…
Many left-statists are very certain they do know better.
You’ve heard it often. Left-statists believe Walmart should be run like Costco. Specifically, they assert that….
Walmart’s wage structure should match Costco’s.
Excuse my bluntness, but that’s mind-numbingly stupid. The people who make this claim are completely unqualified to evaluate business models. It should be obvious to any moderately skillful observer that Walmart and Costco are not doing the same thing or serving the same customers.
Yes, they are both retail stores that sell mostly food and products for the home. Yes, they both offer low unit prices (with unit being the key word, as I will demonstrate). The similarities end there. The variances are far more significant. Let’s count the ways that…
Walmart and Costco are different.
One. The differences start at the front door. Costco requires a membership card. Walmart doesn’t.
Two. The differences continue inside the door. Costco displays most of its products on pallets. Walmart uses smaller shelves.
Three. The differences continue at the level of the products themselves. Costco sells big packages that generally contain a large quantity of the product. Walmart sells small packages that contain a proportionally smaller amount of each item.
Four. Costco employees don’t need to breakdown their large unit packages for arrangement on shelves. They just roll out the pallets and walk away. This means that one employee can put a large amount of product on display with very little effort. But visit Walmart late at night and you’ll see pallets there too. They’re clogging the aisles while swarms of employees move each little item from the pallet to its designated spot on a shelf. This is a labor-intensive task compared to the Costco approach, but it serves an actual social need, as I will demonstrate.
Five. Lower-income people generally lack the cash-flow to buy large quantity packages. They must instead return to the store more often to buy smaller packages, as needed. Costco and Walmart unit prices are, in my experience, similar. But a package of ten items that goes for $20 takes a bigger bite out of a tight, weekly budget than does a single unit package that costs $2. You can see this difference manifested in the customers you see in each store…
Costco customers look more affluent than Walmart customers.
In other words…

Six. Costco functions with fewer employees that it compensates more highly, while Walmart needs many more employees that it has to compensate less.
This difference is readily apparent. You see few employees on the floor in Costco, while Walmart is swarming with them. I wouldn’t be surprised if their payrolls were actually similar in size, but Walmart employs more people. This difference is because of the different social function each company serves.
Wait, there’s a social function to these business models?
Yes. Costco’s social function is to help high-income people save time on shopping. And the nature of its clientele also allows it to charge slight premiums for a select number of higher quality goods. Walmart can do neither thing. Instead, Walmart’s social function is to help low-income people manage their tight budgets. Saying that Walmart should be like Costco is like saying…
Let them eat cake!
Do left-statists actually dislike people who can only afford to shop at Walmart?
You do not improve the world by forcing people who can only afford bread, to buy cake instead. But that’s exactly what you would be doing if you forced Walmart to become Costco. Walmart cannot become Costco. Each performs a different social service. That’s why there are at least six major differences in how each company operates. There are probably even more. I don’t know because it’s not my business.
If you really want to compare apples to apples, then you should probably compare Costco with Sam’s Club, which is largely a Costco clone run by the Walmart company. I bet there are nothing like six differences between Sam’s Club and Costco.
Conclusion
It’s natural to have ideas about how other people should conduct their business. But it’s arrogant to think that those ideas should be forced on people through law or regulation (or often, even though boycotting behavior).
The truth is that you really don’t know what you’re talking about. It’s not your business. You have no direct experience with it. Your desire to mind other people’s business has no more validity than your neighbor’s attempt to mind yours. So…
Drop the arrogance. Stop trying to get The State to impose your schemes and preferences on others. Be less impressed by your own good intentions. Resolve to only use good means to achieve your good ends. Simply put, obey the Zero Aggression Principle — Don’t aggress against others, personally or politically. And if you still feel the need to “DO something,” then…
Go into competition with the offending company. Show the world that your idea really is better, and not mere bloviation. Put your own money where your loud mouth is. You may counter that starting a business is hard. Yes, it is hard. That’s the freaking point. It’s easy to have ideas about what other people should do when you don’t have to do the work involved.
Voting to impose things on companies is much easier than actually starting and running one. That crucial difference between mere opinion and real responsibility ‘s why your allegedly wonderful impositions shouldn’t be allowed.
If you like this article…