Do you make excuses for State criminality?

Captives who sympathize with their captors are said to suffer from Stockholm Syndrome. This is exactly how most people behave towards The State. 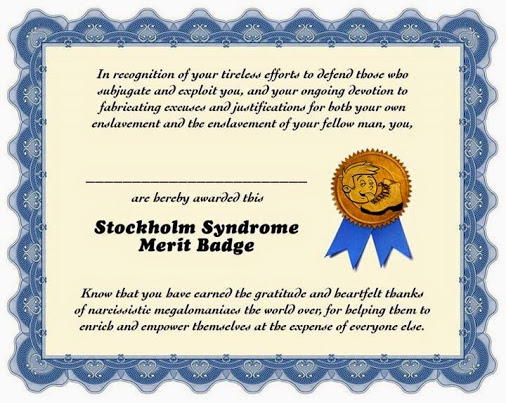 Thanks to Larken Rose for this image. He arrived at this idea independently of the Zero Aggression Project.

[action_bar]Do you like these ideas? Show your empathy for the victims of State crime. Get involved. Subscribe using the form at right.[/action_bar] Engage in Leveraged Thinking. Use this idea as a Mental Lever…

Citizens make excuses for State criminality because of Stockholm Syndrome.

Stockholm Syndrome is misplaced empathy. Politicians and other Agents of The State are the perpetrators — they’re the ones using threats of violence to impose their personal preferences on others. The empathy belongs with the victims, not the perpetrators.
So why does Stockholm Syndrome happen? Why does empathy get misplaced?
Politicians, and other kinds of criminals, are people too. They look like us and sound like us. Even worse, politicians use sweet language to hide the true nature of their actions in a cloak of noble sounding good intentions. In addition…
We elected them, and such is the legendary glow of democracy that we assume responsibility for what the politicians do, even though we have no control over them at all. And so…
We make excuses, the same way kidnap victims sometimes do for their kidnappers. We are to the political class as Patty Hearst was to the Symbionese Liberation Army.  And the cure for the syndrome is…

Does a proposed political policy require a threat of aggressive force to make innocent people act against their own conscience or preference, or does the policy merely deal with the defensive use of force, such as with criminal justice?

Ask yourself  a few more questions…

Bring it all together…

A crime is a crime, no matter who commits the action. If The State commits a criminal act, then call it a crime. Do not employ euphemisms to hide the criminality. Do not suffer from Stockholm Syndrome.

[action_bar]Do you like these ideas? Get involved. Subscribe using the form at right, or the form below.[/action_bar] Use this Metal Lever to improve the world.
By Jim Babka & Perry Willis