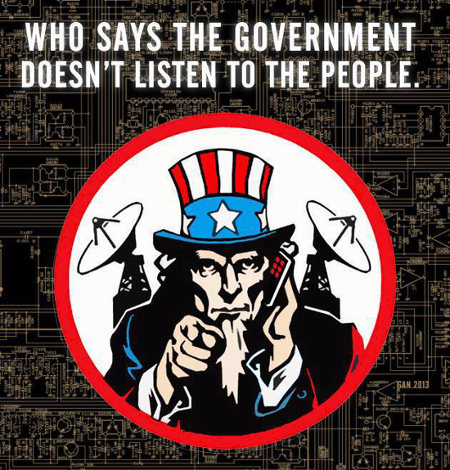 Here’s your chance to strike a blow against illegal #NSA spying. Retweet
We need your help to file an amicus brief in hugely important Fourth Amendment case — Jewel vs National Security Agency. The deadline is tight. The brief is being written now and needs to be filed on Tuesday, August 11th, but we’re short on funding. Can you contribute?
Here are the details…
We have a chance to extend the Supreme Court victory we achieved in the case United States v. Antoine Jones.
Remember, in the Jones case the police attached a GPS tracking device to Jones’s car without a warrant. We uniquely argued that this violated Jones’s 4th Amendment right to be secure in his property against unwarranted government searches.
Neither party to the case and no other amicus brief filed, other than ours, argued that this case should be decided on the basis of property rights. They all argued using the then prevailing legal doctrine…
The privacy doctrine had been the standard for Fourth Amendment cases since the 1960s. No search can occur when a citizen has a “reasonable expectation of privacy.”
But police had new tools. Their technology was trumping “reasonable expectation.” Fewer and fewer spaces were considered private. Cops could slip a spying device on virtually anything they could argue was “public” (such as a car).
We argued the privacy doctrine was insufficient. The original property right criteria, once restored, would provide a much stronger protection. You have a right to be secure in…

This property rights criteria had been absent from Fourth Amendment rulings ever since the privacy doctrine took hold.
Our brief led directly to a 9 to nothing decision that restored the property rights standard!
This was a major victory. But one victory alone isn’t usually enough to secure a precedent. We have to build on it.
So our attorneys have been busy ever since. We’ve filed other amicus briefs to extend this property rights standard to more cases. We’ve even had victories. Now we have another opportunity in a huge case that involves the National Security Agency.
The case is Jewel v. National Security Agency.
The Electronic Frontier Foundation and several individual plaintiffs filed suit against the NSA for its dragnet surveillance of internet communications. This surveillance was exposed when whistleblowers revealed that AT&T’s entire traffic in the San Francisco area was routed through a secret NSA control room.
The District Court denied that the plaintiffs had “standing” to bring this case because all of AT&T’s clients had been affected equally. In other words, everyone has been violated, so no one can complain.
The Ninth Circuit reviewed this crazy ruling. They rejected it,and returned the case to the District Court so they could try again.
But the District Court then ignored the Ninth Circuit’s instructions! They re-issued essentially the same ruling, but with the additional excuse that prosecuting the case would expose State secrets. In other words…
Government violations of the Constitution cannot be challenged in court because they are secret. Can we — will you — let that stand?
The brief being prepared by our attorneys will argue that…