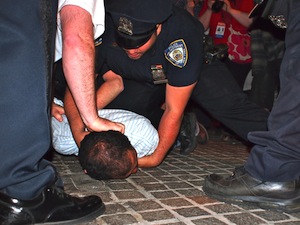 WARNING: There’s foul language in this report.
False charges, financial damages, property destroyed. No recourse! Or is there? Retweet

NOTE: This message was sent yesterday by our partners at DownsizeDC.org, Inc. And today, we share it with you, here in the Zero Aggression Project newsletter (an initiative of the Downsize DC Foundation). We report on DownsizeDC.org’s level of support, below.

We want to file a Supreme Court amicus brief in the case Manuel v. City of Joliet. Here’s what’s at stake…

Can that victim sue the police for a violation of his Fourth Amendment rights?
State courts have denied any remedy to Manuel because of a statute of limitations defense. So Manuel filed a lawsuit in federal court alleging violation of the Fourth Amendment. The U.S. Supreme Court has said that it wants to review this issue. We want to help this man — but more importantly, defend the principle that states cannot make everything better just by dropping charges that should have never been brought.
Imagine how you would feel if this happened to you…
Two Joliet cops stopped a car for turning without signaling in the early hours of March 18, 2011. The car’s owner, Elijah Manuel, was in the passenger seat. One of the cops pulled him out of the car and forced him to the ground, shouting “You remember me: I got you now you fucking nigger.”
Four more cops arrived. They searched the car, ripping up the floor mats and slashing the steering wheel. Manuel was also searched and cuffed. They found a bottle of vitamins and field tested them. They were not drugs.
The cops lied about the results, saying the pills tested positive for ecstasy. They arrested Manuel. The vitamins failed another drug test at the station. Instead of releasing Manuel, the police further falsified their report. They also claimed Manuel made furtive moves and smelled like “burnt cannabis.”
An independent lab ruled that the pills were not drugs on April 1, 2011, but the police continued to hold Manuel. He wasn’t arraigned until April 8, and was only released, with the charges dismissed, on May 4, 2011. Meanwhile…
Manuel couldn’t work or attend college. He was forced to drop his classes, for which he still had to pay. He defaulted on bills, ruining his credit rating.
Manuel sought damages from the city on April 10, 2013. His claims were futile because of a short state statute of limitations. But Manuel also filed a malicious prosecution claim in federal court based on a violation of the Fourth Amendment, which was still timely because the claim did not arise until he was released on May 4, 2011. But the court ruled that it was bound by Seventh Circuit precedent to find that…

In other words, since Manuel’s prosecution was never completed, he cannot claim malicious prosecution.
Is this a winnable case?
As Manuel points out in his petition for Supreme Court review, only the Seventh Circuit views things this way. All other Circuits who have ruled on the matter have determined that the Constitution protects against pretrial detention without probable cause for the period up to dismissal of the charges.
Would you like to see someone make these two arguments in support of Manuel?

We want to file an amicus brief on Manuel’s behalf. The U.S. Supreme Court has accepted his case for review. Can you help us fund this work?
Please make your contribution, to the Downsize DC Foundation, for that purpose. We use the secure online page of the Zero Aggression Project.